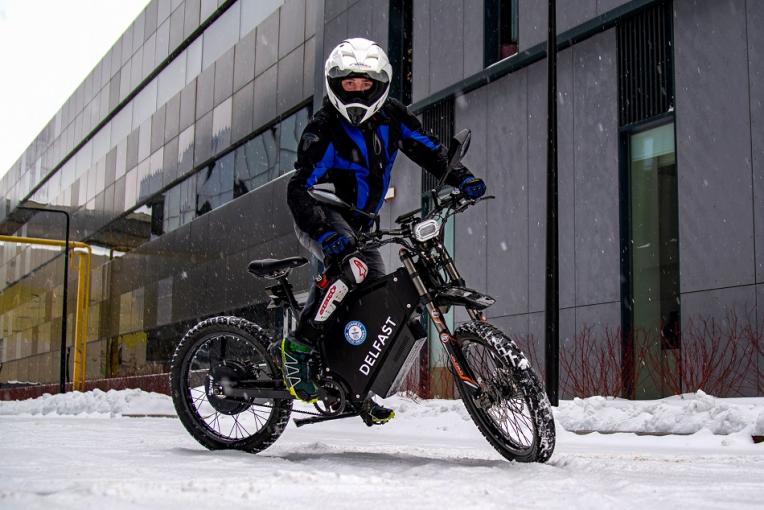 Coming to a street near you

The concept of an e-bike is not new, history tells us that the first patent for an electric bicycle was granted in the USA back in 1895. Unfortunately, however batteries at the time were in their infancy and the idea languished in a patent filing cabinet until the remorseless creep of technology in particular the development of the lithium-ion battery and advances in electric motor efficiency finally allowed the first e-bikes to see the light of day. These early e-bikes had limited range and heavy batteries and mainly worked on the pedal assist mode in which the rider turned the pedals as on a normal bicycle with the motor giving some extra input to make pedaling easier, this was all well and good until the battery ran out of charge at which point the rider was left with a heavy bicycle and very tired legs.

Clearly what was needed was a complete redesign of the e-bike concept in two main areas, firstly to re-imagine the e-bike frame to create a structure tailor made for electrical power and secondly to develop electronic control and battery management systems that massively extend the range of the e-bike.

As with many developments in technology the catalyst for change is often something completely unrelated, in this case it was a mobile telephone that suddenly ceased to work.

In August of 2014 Ukrainian businessman and technology entrepreneur, Daniel Tonkopiy was hard at work in his office when his mobile phone went completely dead. He tried to order another one for immediate delivery but there was no delivery company in existence in Kyiv offering one hour delivery. This got Daniel thinking, if I can order a pizza and have it delivered in 30 minutes why can’t I order a telephone, or indeed anything else and have it delivered just as quickly.

Shortly after this epiphany Daniel founded Delfast a 1-hour eco-friendly delivery company that would use bicycle couriers to complete orders for clients. In order to increase speed and reduce the carbon footprint of the business electric bicycles were the vehicles of choice for the Delfast couriers.

Delfast tried many different manufacturers and models of e-bike but none of them were able to cope with the daily battering they received on the streets of Kyiv while in constant use by the company’s couriers, the e-bikes literally fell apart within months having been designed for sedate leisure activities and not 12 hour shifts on Kyiv’s pot-holed streets.

With nothing on the market that met the requirements of Delfast the company set out to design and build the perfect rugged e-bike that had the strength to cope with rigorous daily use along with a very high range. In 2014 a typical range for an e-bike was around the 30Km - 50Km level which was nowhere near enough for a courier who would have to stop work to charge his e-bike’s battery or take to a second e-bike. What was required was a bigger battery which meant existing frame designs were unsuitable and so a complete re-design of the bicycle was undertaken by Daniel and his team including the developments of battery management systems that dramatically increased range and an on-the-move recharging system similar to the KERS system used in Formula 1 cars. This technology allowed the battery to be recharged when under braking or when freewheeling down a slope.

The Delfast courier company proved an ideal testing ground to perfect the design and implementation of these new technologies with software and communication systems able to analyze the e-bike’s performance in real time under hard operating conditions and allow for improvements too be made on a continuous basis. In effect Delfast was using the courier company as an ongoing research and development platform and represents one of the few occasions in the business world where R&D was a profit center and not a cost center

Between 2014 and 2017 huge advances were made by the Delfast team in the e-bike program, so much so that citizens of Kyiv would seek out Daniel and ask to buy one of the bicycles from him having seen them whizzing around the city, Daniel’s answer was that Delfast is a courier company, we do not sell bicycles. That all changed in late 2017 when bowing to customer demand to sell the bicycles to the public Delfast hosted a Kickstarter campaign raising $150,000 which was used to start manufacturing the first Delfast e-bikes for sale to private individuals.

The battery management system was so advanced that Delfast claimed a range of up to 370 Kms on a single battery charge from a standard household electrical socket. The response from the media was both incredulous and disbelieving, 370Kms on a single charge without pedal assist is impossible was the oft repeated refrain. In order to showcase the range capabilities of the Delfast battery systems along with the new frame design Delfast arranged for the Guinness Book of World Records team to visit Kyiv and carry out a controlled test to prove Daniel’s claims once and for all. The Guinness invigilators overseeing the record attempt demanded that the pedals be removed so no pedal assist was possible and using the Kyiv velodrome track a standard Delfast Prime e-bike recorded 367.03 Kms over 16 hours on a single charge. This world record still stands today, in fact no other e-bike even comes close for range. To date Delfast has applied for and received 3 patents relating to its homegrown battery systems and is in the process of preparing 10 more patent applications to protect the IP behind this new technology. 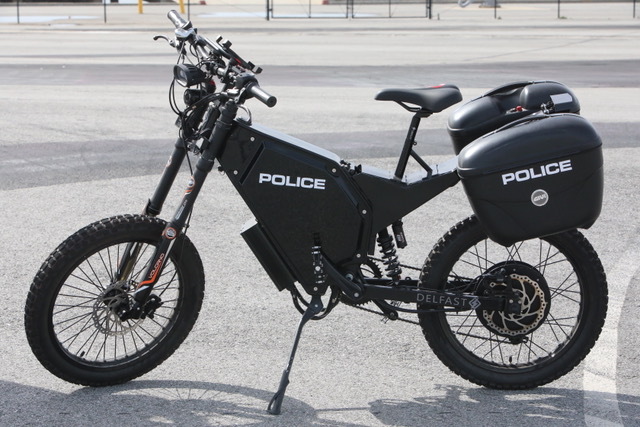 Given the proven long range, acceleration and high top speed of the Delfast e-bike it will come as no surprise to the reader that the police forces of the world have started taking an interest in using Delfast bikes to equip their officers. The Los Angeles Police Departments are currently running trials with Delfast bikes while just across the border in Mexico the city of Mexicali has already purchased a fleet of Delfast TopCop bikes and is using them in their day-to-day operations to combat crime. In addition, more than 20 US police forces have expressed interest in acquiring Delfast bikes for their own law enforcement activities. It is not just the range and speed of Delfast bikes that make the model attractive to law enforcement, Delfast bikes come with tracking systems included allowing a base station to monitor the location of the bike, anti-theft systems built in and communication directly with an app to report their status to the rider whether he is on the bike or away having parked it.

For 2021 Delfast is focusing its sales activities on one specific model, the Top 3.0 with a 321 Km range, a top speed of 80Kmh and an unladen weight of 70Kgs.

It is worth noting that the Delfast Top 3.0 e-bike offers some substantial savings to the professional courier or delivery rider as well as the potential for increased earnings as more deliveries are able to be completed on any given working shift. First of all, the Top 3.0 is an e-bike and can be charged from a standard household socket at a cost of approximately US$0.21 per full charge (obviously this varies depending on the tariff charged by the electricity provider) or around US$0.07 per 100 Km. A moped would use around 3.5 litres of petrol for the same 100Km costing somewhere in the region of US$3.50. In addition, the Delfast Top3.0 has fewer moving parts than a moped as there is no clutch to wear out or gearbox to maintain thus reducing the maintenance cost over time. 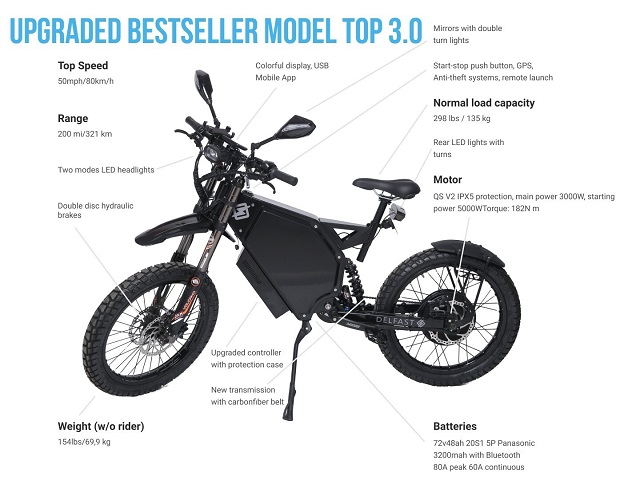 Comparing the Delfast Top 3.0 to a standard pedal bike the comparison is even more favourable. Operating a pedal bike as a courier demands a large calorie expenditure and thus the pedal courier has to consume a lot more calories per day to keep operating efficiently, in other words his food bill goes up substantially. With the Top 3.0 electric battery and motor are taking the strain meaning the courier’s calorie demand is dramatically reduced resulting in a much lower food bill. On the other side of the equation with the Top 3.0 ebike the courier will be able to make more deliveries per day utilizing the higher speed and handling qualities of the Top 3.0 and so will earn a much higher income per working shift. So, the courier is left with the best of both worlds, reduced operating costs and higher income potential.

At Delfast we see an opportunity to increase sales to the delivery and courier sector both in private sales to individual couriers and in closing large orders for hundreds of e-bikes at a time to major delivery companies. In particular food delivery companies whether they be household names from the Pizza market or delivery companies working with multiple vendors will benefit from using the Delfast Top 3.0 bike in reduced maintenance costs, reduced energy costs, a single moped for example consumes around US$2,000 of fuel per year and the ability to market themselves as good corporate citizens having joined the green revolution.

To further boost its green credentials the battery used in the Delfast range is capable of up to 3,000 charging cycles before it starts to show signs of degradation. Even if the bicycle is charged daily the battery boasts a working life of more than 10 years. Given the extreme range of the Delfast Top 3.0 a charging requirement of two or three times a week will be more than sufficient for most users, this would lead to a battery life of 20 – 28 years. Delfast is mindful of the ecological impact of discarded batteries once their intended operating life is over and has put in place a disposal and recycling plan in which the batteries can be repurposed as portable chargers.

In conclusion then with the Delfast Top 3.0 that green future which commentators so often talk about being just around the corner has finally arrived. To join the green revolution either for your business or for personal use all you need to do is contact us directly and place an order. For readers wishing to join with Delfast and own a part of the Delfast story an equity raising campaign is currently underway and can be viewed here https://www.fundable.com/delfast

It is envisaged that the exit strategy for new shareholders investing in Delfast will be either floating the company on a major stock exchange such as NASDAQ or the London Stock Exchange or a corporate takeover from one of the big industry transport manufacturers.