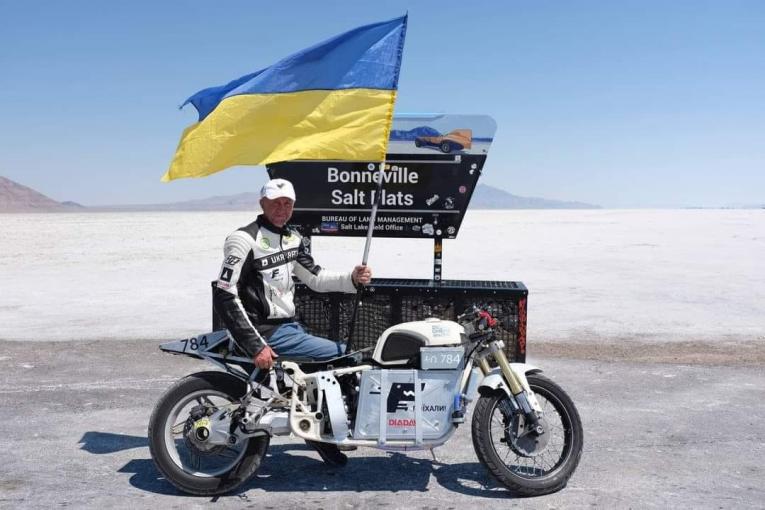 Delfast has made it again! The company has set an electric speed record at Bonneville Speed Week 2021. This feat was achieved with an electric version of a DNEPR motorcycle - Delfast Dnepr Electric. The DNEPR brand has a cult following in the United States.

The DNEPR motorcycle has its roots in the M-72 model built by the Soviet Union to replace the heavy motorcycles of the Red Army. The Winter War in Finland (1939-1940) revealed the deficiencies of the Soviet motorbikes of that time. The Soviet military selected the BMW R 71 as a replacement. The Molotov-Ribbentrop Pact allowed the transfer of the design and know-how from BMW to the Soviet manufacturers.

Three factories were planned to produce the M-72. Ultimately, only the Moskovskiy Mototsikletniy Zavod (MMZ), a factory near Moscow, produced complete motorcycles before the fateful 1941. In that year, German troops invaded the Soviet Union and production of the M-72 was moved east. The Irbit Motorcycle Factory (IMZ) in Western Siberia took over the production.

In 1952, the KMZ factory in Kyiv got a shipment of 500 M-72 engines from the IMZ. These engines allowed the Ukrainian factory to produce its first batch of M-72 motorcycles. The KMZ continued the production of this model until 1956. The next year, the People’s Republic of China purchased the production line of this vehicle. Production of the M-72 continued in China through the mid-1980s.

Fast forward to 2021, Delfast has acquired the full DNEPR trademark rights. Technological development and designs of DNEPR became the intellectual property of Delfast during late July this year. Delfast is well-known as a manufacturer of high-end electric bicycles. Using its vast experience and expertise with electric vehicles, Delfast set out to create an electric version of the legendary Ukrainian DNEPR motorcycle.

Delfast engineers put a lot of effort into swapping the gasoline engine of the classic DNEPR motorbike with a powerful electric motor. The motorcycle was equipped with an EMRAX-228 synchronous electric motor. This cutting-edge technology machine has permanent magnets and weighs only 12 kg. Yet, it produces an astonishing power of 50 kW, which is equivalent to 68 HP. The motor is driven by a 12 kWh/800 V battery. With a maximum output of 200 A, the motor can reach a torque of 220 Nm.

Bonneville Speed Week 2021 was the perfect scenario to test the capabilities of the Delfast DNEPR electric prototype. This event was held near Wendover, Utah, from August 7 to August 13. The Delfast Dnepr Electric Motorcycle set a new speed record by racing at 107.2 mph in a motorcycle category “A” Omega.

The pilot of the Delfast prototype was Serhii Malyk, a Ukrainian professional racer. He is a multi-champion with a track record of winnings at Bonneville Salt Flats in 2017 and 2018. His most recent feat shattered his previous record set in 2018, which stood at 104.78 mph.

With this new record, Delfast reaffirms its position as the top manufacturer of electric two-wheel vehicles in the world. In 2017, Delfast set the Guinness World record for the greatest distance (228 miles) traveled by its Prime electric bike on a single battery charge. This very same technology is used in its current TOP 3.0 electric bike model.

Welcome! How can we help you?

Any questions?
Thank you, we'll call you back soon!
Back ─